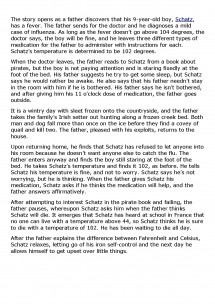 The story opens as a father discovers that his 9-year-old boy, Schatz, has a fever. The father sends for the doctor and he diagnoses a mild case of influenza. As long as the fever doesn't go above 104 degrees, the doctor says, the boy will be fine, and he leaves three different types of medication for the father to administer with instructions for each. Schatz's temperature is determined to be 102 degrees.

When the doctor leaves, the father reads to Schatz from a book about pirates, but the boy is not paying attention and is staring fixedly at the foot of the bed. His father suggests he try to get some sleep, but Schatz says he would rather be awake. He also says that his father needn't stay in the room with him if he is bothered. His father says he isn't bothered, and after giving him his 11 o'clock dose of medication, the father goes outside.

It is a wintry day with sleet frozen onto the countryside, and the father takes the family's Irish setter out hunting along a frozen creek bed. Both man and dog fall more than once on the ice before they find a covey of quail and kill two. The father, pleased with his exploits, returns to the house.

Upon returning home, he finds that Schatz has refused to let anyone into his room because he doesn't want anyone else to catch the flu. The father enters anyway and finds the boy still staring at the foot of the bed. He takes Schatz's temperature and finds it 102, as before. He tells Schatz his temperature is fine, and not to worry. Schatz says he's not worrying, but he is thinking. When the father gives Schatz his medication, Schatz asks if he thinks the medication will help, and the father answers affirmatively.

After attempting to interest Schatz in the pirate book and failing, the father pauses, whereupon Schatz asks him when the father thinks Schatz will die. It emerges that Schatz has heard at school in France that no one can live with a temperature above 44, so Schatz thinks he is sure to die with a temperature of 102. He has been waiting to die all day.

After the father explains the difference between Fahrenheit and Celsius, Schatz relaxes, letting go of his iron self-control and the next day he allows himself to get upset over little things.

Ayers Rock A Dream Time Story The Wiyai Kutjara Story Two Boys
Ayers Rock is the largest rock in the world. It is a giant outcrop in the Northern Territory of...

The Story Of Hengest And Horsa
There are no written eyewitness accounts dating from the start of English invasion, so we have to...

Charles Manson The Full Story
Murder! Quiet and secluded is just what the young movie star wanted. The canyons above Beverly...
Sus!