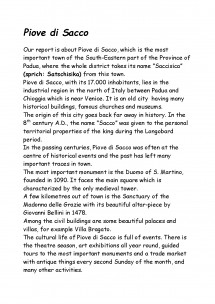 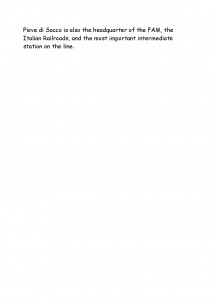 Our report is about Piove di Sacco, which is the most important town of the South-Eastern part of the Province of Padua, where the whole district takes its name Saccisica (sprich: Satschisika) from this town.

Piove di Sacco, with its 17. 000 inhabitants, lies in the industrial region in the north of Italy between Padua and Chioggia which is near Venice. It is an old city having many historical buildings, famous churches and museums.

The origin of this city goes back far away in history. In the 8th century A. D., the name Sacco was given to the personal territorial properties of the king during the Longobard period. In the passing centuries, Piove di Sacco was often at the centre of historical events and the past has left many important traces in town.

The most important monument is the Duomo of S. Martino, founded in 1090. It faces the main square which is characterized by the only medieval tower.

A few kilometres out of town is the Sanctuary of the Madonna delle Grazie with its beautiful altar-piece by Giovanni Bellini in 1478. The cultural life of Piove di Sacco is full of events. There is the theatre season, art exhibitions all year round, guided tours to the most important monuments and a trade market with antique things every second Sunday of the month, and many other activities.

Piove di Sacco is also the headquarter of the FAM, the Italian Railroads, and the most important intermediate station on the line.