The impact and spread of consumer society 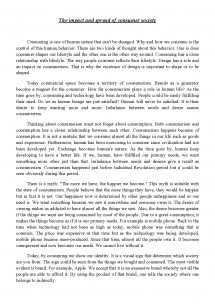 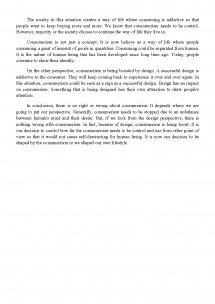 Consuming is one of human nature that can't be changed. Why and how we consume is the control of this human behavior. There are two kinds of thought about this behavior. One is does consumer shapes our lifestyle and the other one is the other way around. Consuming has a close relationship with lifestyle. The way people consume reflects their lifestyle. Design has a role and an impact on consumerism. That is why the existence of design is important to shape or to be shaped.

Today commercial space becomes a territory of consumerism. Brands as a generator become a magnet for the consumer. How far consumerism plays a role in human life? As the time goes by, consuming and technology have been developed. People could be easily fulfilling their need. Do we as human beings are just satisfied? Human will never be satisfied. It is their desire to keep wanting more and more. Imbalance between needs and desire causes consumerism.

Thinking about consumerism must not forget about consumption. Both consumerism and consumption has a closer relationship between each other. Consumerism happens because of consumption. It is not a mistake that we consume almost all the things in our life such as goods and experience. Furthermore, human has been exercising to consume since civilization had not been developed yet. Exchange becomes human's nature. As the time goes by, human keep developing to have a better life. If we, human, have fulfilled our primary needs, we want something more other just than that. Imbalance between needs and desires give a result as consumerism. Consumerism happened just before Industrial Revolution period but it could be seen obviously during this period.

There is a myth: "The more we have, the happier we become." This myth is suitable with the state of consumerism. People believe that the more things they have, they would be happier but in fact it is not. Our happiness now is determined by other people unhappiness and so our need is. We want something because we saw it somewhere and someone owns it. The desire of owning makes us addicted to have almost all the things we saw. Also, the desire becomes greater if the things we want are being consumed by most of the people. Due to a great consumption, it makes the things become as if it is our primary needs. For example is mobile phone. Back to the time when technology had not been as high as today, mobile phone was something that is common. The price was expensive at that time but as the technology was being developed, mobile phone became mass-produced. Since that time, almost all the people own it. It becomes omnipresent and now becomes our needs. We cannot live without it.

Today, by consuming we show our identity. It is a visual sign that determine which society are you from. The sign could be seen from the things we bought and consumed. The most visible evident is brand. For example, Apple. We accept that it is an expensive brand whereby not all the people are able to afford it. By using the product of that brand, one tells the society where one belongs to indirectly.

The society in this situation creates a way of life where consuming is addictive so that people want to keep buying more and more. We know that consumerism needs to be control. However, majority or the society choose to continue the way of life they live in.

Consumerism is not just a concept. It is now believe as a way of life where people consuming a great of amount of goods in quantities. Consuming could be separated from human. It is the nature of human being that has been developed since long time ago. Today, people consume to show their identity.

On the other perspective, consumerism is being boosted by design. A successful design is addictive to the consumer. They will keep coming back to experience it over and over again. In this situation, consumerism could be seen as a sign as a successful design. Design has an impact on consumerism. Something that is being designed has their own attraction to draw people's attention.

In conclusion, there is no right or wrong about consumerism. It depends where we are going to put our perspective. Generally, consumerism needs to be stopped due to an unbalance between human's mind and their desire. But, if we look from the design perspective, there is nothing wrong with consumerism. In fact, because of design, consumerism is being boost. It is our decision to control how far the consumerism needs to be control and use from other point of view so that it would not cause self-destructing for human being. It is now our decision to be shaped by the consumerism or we shaped our own lifestyle.

The impact of secessionon war upon American culture
It has been the curious fate of the United States to exert immense influence in the modern world,...

The Romanian economy and the standards of European Union
The idea of a united Europe was once just a dream in the minds of philosophers and visionaries....

The Role of Science and Technology in The Development of World Economy
INTRODUCTION The relevance of the investigated theme. The evolution noted in the international...

The book of mormon. Cultural approaches to pseudotranslation
The mere association of The Book of Mormon with the word translation may confuse someone who...

The international marketing end the ideea of branding
In the era of globalization the world people live in becomes more and more complex, so that the...
Sus!