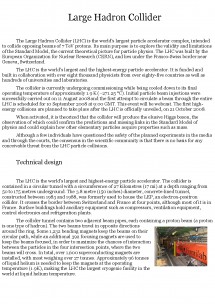 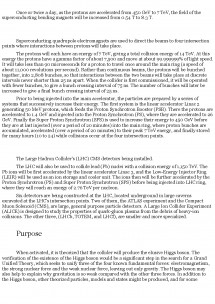 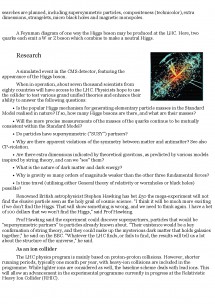 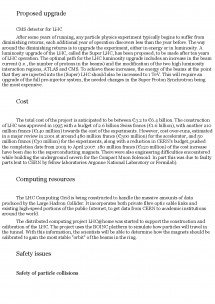 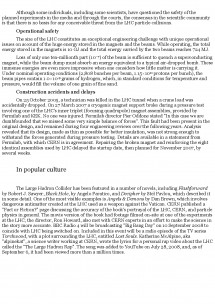 The Large Hadron Collider (LHC) is the worlds largest particle accelerator complex, intended to collide opposing beams of 7 TeV protons. Its main purpose is to explore the validity and limitations of the Standard Model, the current theoretical picture for particle physics. The LHC was built by the European Organization for Nuclear Research (CERN), and lies under the Franco-Swiss border near Geneva, Switzerland.

The LHC is the worlds largest and the highest-energy particle accelerator. It is funded and built in collaboration with over eight thousand physicists from over eighty-five countries as well as hundreds of universities and laboratories.

The collider is currently undergoing commissioning while being cooled down to its final operating temperature of approximately 1. 9 K (-271. 25 C). Initial particle beam injections were successfully carried out on 11 August 2008 and the first attempt to circulate a beam through the entire LHC is scheduled for 10 September 2008 at 9: 00 GMT. This event will be webcast. The first high-energy collisions are planned to take place after the LHC is officially unveiled, on 21 October 2008. When activated, it is theorized that the collider will produce the elusive Higgs boson, the observation of which could confirm the predictions and missing links in the Standard Model of physics and could explain how other elementary particles acquire properties such as mass.

Although a few individuals have questioned the safety of the planned experiments in the media and through the courts, the consensus in the scientific community is that there is no basis for any conceivable threat from the LHC particle collisions.

The LHC is the worlds largest and highest-energy particle accelerator. The collider is contained in a circular tunnel with a circumference of 27 kilometres (17 mi) at a depth ranging from 50 to 175 metres underground. The 3. 8 metre (150 inches) diameter, concrete-lined tunnel, constructed between 1983 and 1988, was formerly used to house the LEP, an electron-positron collider. It crosses the border between Switzerland and France at four points, although most of it is in France. Surface buildings hold ancillary equipment such as compressors, ventilation equipment, control electronics and refrigeration plants.

Once or twice a day, as the protons are accelerated from 450 GeV to 7 TeV, the field of the superconducting bending magnets will be increased from 0. 54 T to 8. 3 T.

Superconducting quadrupole electromagnets are used to direct the beams to four intersection points where interactions between protons will take place.

The protons will each have an energy of 7 TeV, giving a total collision energy of 14 TeV. At this energy the protons have a gamma factor of about 7, 500 and move at about 99. 999999% of light speed. It will take less than 90 microseconds for a proton to travel once around the main ring (a speed of about 11, 000 revolutions per second). Rather than continuous beams, the protons ...