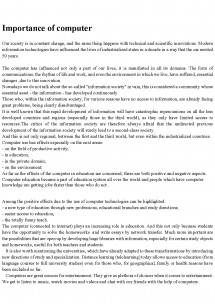 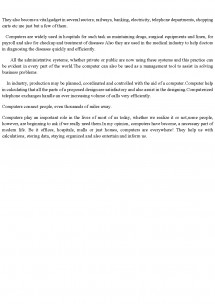 Our society is in constant change, and the same thing happens with technical and scientific innovations. Modern information technologies have influenced the lives of industrialized states in a decade in a way that the car needed 50 years.

The computer has influenced not only a part of our lives, it is manifested in all its domains. The form of communications, the rhythm of life and work, and even the environment in which we live, have suffered, essential changes ,due to this innovation.

Nowadays we do not talk about the so-called "information society" in vain, this is considered a community whose essential asset - the information - has developed continuously

Those who, within the information society, for various reasons have no access to information, are already facing great problems, being clearly disadvantaged.

And this is not only regional, between the first and the third world, but even within the industrialized countries.

Computer use has effects especially on the next areas:

- on the field of productive activity;

- in the private domain;

As far as the effects of the computer in education are concerned, there are both positive and negative aspects.

Among the positive effects due to the use of computer technologies can be highlighted:

- a new type of education through new professions, educational branches and study directions;

The computer (connected to internet) plays an increasing role in education. And this not only because students have the opportunity to solve the homeweorks and write essays by network transfer. Much more important are the possibilities that are open up by developing huge libraries with information, especially for certain study objects and homeworks, useful for both teachers and students.

It is also worth mentioning the universities, which have already adapted to these transformations by introducing new directions of study and specialization. Distance learning (telelearning) today allows access to education (from language courses to full university studies) even for those who, for geographical, family or health reasons have been excluded so far.

Computers are great sources for entertainment. They give us plethora of choices when it comes to entertainment. We get to listen to music, watch movies and videos and chat with our friends with the help of computers.

They also become a vital gadget in several sectors; railways, banking, electricity, telephone departments, shopping carts etc are just but a few of them.

Computers are widely used in hospitals for such task as maintaining drugs, surgical equipments and linen, for payroll and also for checkup and treatment of diseases Also they are used in the medical industry to help doctors in diagnosing the diseases quickly and efficiently.

All the administrative systems, whether private or public are now using these systems and this practice can be evident in every part of the world.The computer can also be used as a management tool to assist in solving business problems.

In industry, production may be planned, coordinated and controlled with the aid of a computer.Computer help in calculating that all the parts of a proposed design are satisfactory and also assist in the designing.Computerized telephone exchanges handle an ever increasing volume of calls very efficiently.

Computers connect people, even thousands of miles away.

Computers play an important role in the lives of most of us today, whether we realize it or not,some people, however, are beginning to ask if we really need them.In my opinion, computers have become, a necessary part of modern life. Be it offices, hospitals, malls or just homes, computers are everywhere! They help us with calculations, storing data, staying organized and also entertain and inform us.

Computer Architecture in Minerva Virec Platform
- The use of network technologies to create, foster, deliver, and facilitate learning, anytime...

Computer And Internet Addiction
This subject received my attention, because I do know it represents a real problem today. More...

The Art of Computer Game Design
COMPUTERS The most striking feature of the computer in a game context is its responsiveness....
Sus!