English and American climate and weather 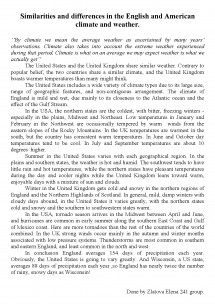 - 'By climate we mean the average weather as ascertained by many years' observations. Climate also takes into account the extreme weather experienced during that period. Climate is what on an average we may expect weather is what we actually get''

The United States includes a wide variety of climate types due to its large size, range of geographic features, and non-contiguous arrangement. The climate of England is mild and wet, due mainly to its closeness to the Atlantic ocean and the effect of the Gulf Stream.

In the USA, the northern states are the coldest, with bitter, freezing winters - especially in the plains, Midwest and Northeast. Low temperatures in January and February in the Northwest are occasionally tempered by warm winds from the eastern slopes of the Rocky Mountains. In the UK temperatures are warmest in the south, but the country has consistent warm temperatures. In June and October day temperatures tend to be cool. In July and September temperatures are about 10 degrees higher.

Summer in the United States varies with each geographical region. In the plains and southern states, the weather is hot and humid. The southwest tends to have little rain and hot temperatures, while the northern states have pleasant temperatures during the day and cooler nights while the United Kingdom leans toward warm, enjoyable days with a mixture of sun and clouds.

In the USA, tornado season arrives in the Midwest between April and June, and hurricanes are common in early summer along the southern East Coast and Gulf of Mexico coast. Here are more tornadoes than the rest of the countries of the world combined. In the UK strong winds occur mainly in the autumn and winter months associated with low pressure systems. Thunderstorms are most common in southern and eastern England, and least common in the north and west.

English - First Year of Study
UNIT 1 Objectives: a. Students will be albe to recognize and use the present tenses, both...

English Modernism
JAMES JOYCE Now, as never before, his strange name seemed to him a prophecy. So timeless seemed...

The impact of secessionon war upon American culture
It has been the curious fate of the United States to exert immense influence in the modern world,...