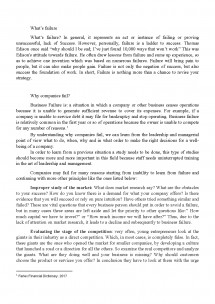 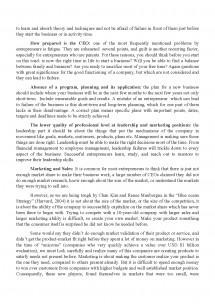 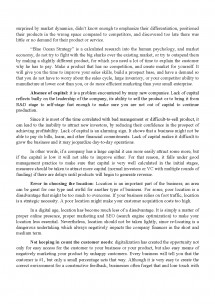 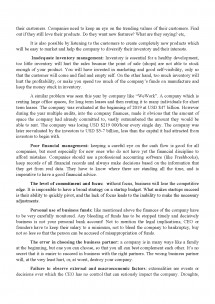 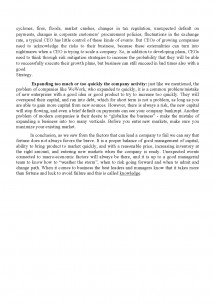 What's failure? In general, it represents an act or instance of failing or proving unsuccessful, lack of Success. However, personally, failure is a ladder to success. Thomas Edison once said "why should I be sad; I've just found 10,000 ways that won't work" This was Edison's attitude towards failure. He often drew lessons from failure and sums up experience, so as to achieve one invention which was based on numerous failures. Failure will bring pain to people, but it can also make people gain. Failure is not only the negation of success, but also success the foundation of work. In short, Failure is nothing more than a chance to revise your strategy.

By understanding why companies fail, we can learn from the leadership and managerial point of view what to do, when, why and in what order to make the right decisions for a well-being of a company.

In order to learn from a previous situation a study needs to be done, this type of studies should become more and more important in this field because staff needs uninterrupted training in the art of leadership and management.

Companies may fail for many reasons starting from inability to learn from failure and continuing with more other principles like the ones listed below:

Improper study of the market: What does market research say? What are the obstacles to your success? How do you know there is a demand for what your company offers? Is there evidence that you will succeed or rely on pure intuition? Have others tried something similar and failed? These are vital questions that every business person should put in order to avoid a failure, but in many cases these areas are left aside and let the priority to other questions like:" How much capital we have to invest?" or "How much income we will have after?" Thus, due to the lack of attention on market research, it leads to a decline and subsequently to business failure.

Evaluating the stage of the competition: very often, young entrepreneurs look at the giants in their industry as a direct competition. Which, in most cases, is completely false. In fact, these giants are the ones who opened the market for smaller companies, by developing a culture that launched a road or a direction for all the others. So examine the real competitors and analyze the giants. What are they doing well and your business is missing? Why should customers choose the product or services you offer? In conclusion they have to look at them with the urge to learn and absorb theory and techniques and not be afraid of failure in front of them just before they start the business or in activity time.

How prepared is the CEO: one of the most frequently mentioned problems by entrepreneurs is fatigue. They are exhausted several points, and guilt is another recurring factor, especially for entrepreneurs who are parents. For these reasons, you should think before you start on this road: is now the right time in life to start a business? Will you be able to find a balance between family and business? Are you ready to sacrifice most of your free time? Again questions with great significance for the good functioning of a company, but which are not considered and they can lead to failure.

Absence of a program, planning and its application: the plan for a new business should include where your business will be in the next few months to the next few years not only short-term. Include measurable goals and results. A mistake of an entrepreneur which can lead to failure of the business is this short-term and long-term planning, which for one part of them lacks in their disadvantage. A correct plan means specific plans with important points, dates, targets and deadlines made to be strictly achieved.

The lower quality of professional level at leadership and marketing positions: the leadership part it should be about the things that put the mechanisms of the company in movement like goals, markets, customers, products, plans etc. Management is making sure those things are done right. Leadership must be able to make the right decisions most of the time. From financial management to employee management, leadership failures will trickle down to every aspect of the business. Successful entrepreneurs learn, study, and reach out to mentors to improve their leadership skills.

Marketing and Sales: It is common for most entrepreneurs to think that there is just not enough market share to make their business work, a large number of CEOs claimed they did not do enough market research, know enough about the size of the market, or understand the markets they were trying to sell into.

However, as we are being tough by Chan Kim and Renee Mauborgne in the "Blue ocean Strategy" (Harvard, 2004) it is not about the size of the market, or the size of the competition, it is about the ability of the company to successfully capitalize on the market share which has never been there to begin with. Trying to compete with a 10-year-old company with larger sales and larger marketing ability is difficult, so create your own market. Make your product something that the consumer itself is surprised he did not know he needed before.