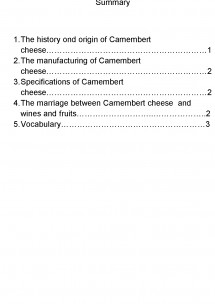 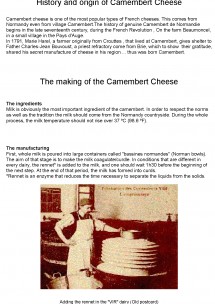 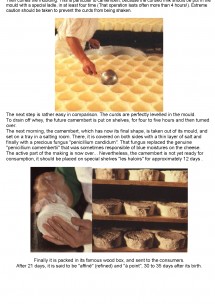 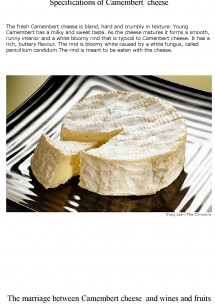 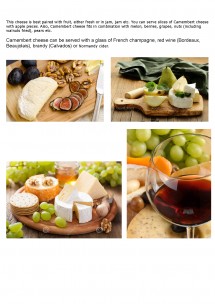 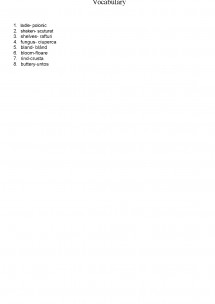 Camembert cheese is one of the most popular types of French cheeses. This comes from Normandy even from village Camembert.The history of genuine Camembert de Normandie

begins in the late seventeenth century, during the French Revolution , On the farm Beaumoncel,

in a small village in the Pays d'Auge.

In 1791, Marie Harel, a farmer originally from Crouttes , that lived at Camembert, gives shelter to Father Charles-Jean Bouvoust, a priest refractory come from Brie, which to show their gratitude, shared his secret manufacture of cheese in his region thus was born Camembert.

The making of the Camembert Cheese

Milk is obviously the most important ingredient of the camembert. In order to respect the norms as well as the tradition the milk should come from the Normandy countryside. During the whole process, the milk temperature should not rise over 37 sC (98.6 sF).

First, whole milk is poured into large containers called "bassines normandes" (Norman bowls). The aim of that stage is to make the milk coagulate/curdle. In conditions that are different in every dairy, the rennet* is added to the milk, and one should wait 1h30 before the beginning of the next step. At the end of that period, the milk has formed into curds.

*Rennet is an enzyme that reduces the time necessary to separate the liquids from the solids.

Adding the rennet in the "VIR" dairy (Old postcard)

Then comes the moulding. This is particular to camembert, because the curdled milk should be put in the mould with a special ladle, in at least four time (That operation lasts often more than 4 hours!). Extreme caution should be taken to prevent the curds from being shaken.

The next step is rather easy in comparison. The curds are perfectly levelled in the mould.

To drain off whey, the future camembert is put on shelves, for four to five hours and then turned over.

The next morning, the camembert, which has now its final shape, is taken out of its mould, and set on a tray in a salting room. There, it is covered on both sides with a thin layer of salt and finally with a precious fungus "penicillium candidum". That fungus replaced the genuine "penicillium camembertii" that was sometimes responsible of blue moistures on the cheese.

The active part of the making is now over Nevertheless, the camembert is not yet ready for consumption, it should be placed on special shelves "les haloirs" for approximately 12 days

Finally it is packed in its famous wood box, and sent to the consumers.

Cheese Making
Primitive forms of cheese have been made since humans started domesticating animals. No one knows...