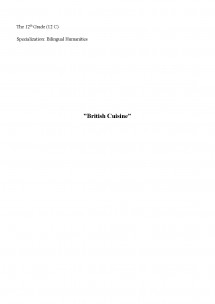 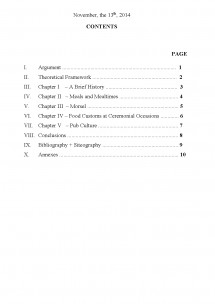 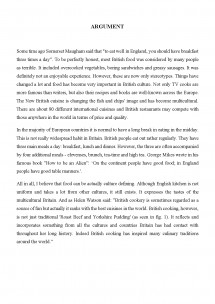 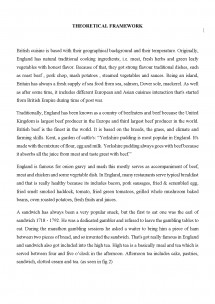 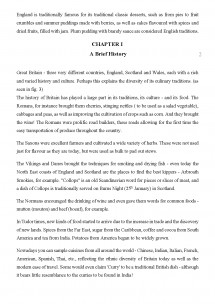 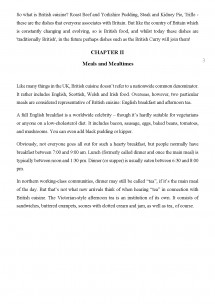 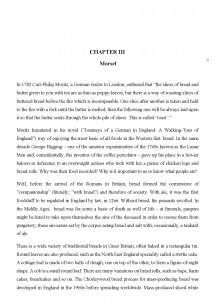 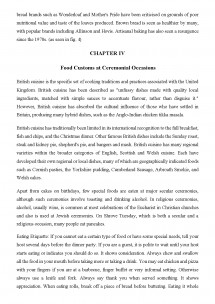 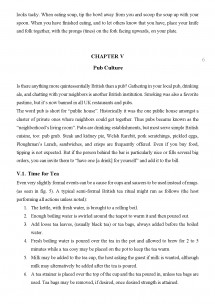 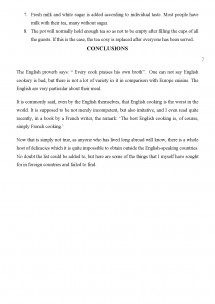 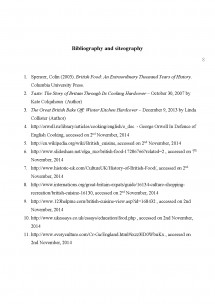 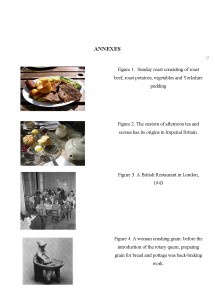 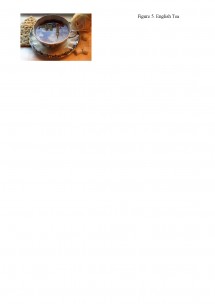 Some time ago Somerset Maugham said that "to eat well in England, you should have breakfast three times a day". To be perfectly honest, most British food was considered by many people as terrible. It included overcooked vegetables, boring sandwiches and greasy sausages. It was definitely not an enjoyable experience. However, these are now only stereotypes. Things have changed a lot and food has become very important in British culture. Not only TV cooks are more famous than writers, but also their recipes and books are well-known across the Europe. The New British cuisine is changing the fish and chips' image and has become multicultural. There are about 80 different international cuisines and British restaurants may compete with those anywhere in the world in terms of price and quality.

In the majority of European countries it is normal to have a long break in eating in the midday. This is not really widespread habit in Britain. British people eat out rather regularly. They have three main meals a day: breakfast, lunch and dinner. However, the three are often accompanied by four additional meals - elevenses, brunch, tea-time and high tea. George Mikes wrote in his famous book "How to be an Alien": 'On the continent people have good food; in England people have good table manners.'.

All in all, I believe that food can be actually culture defining. Although English kitchen is not uniform and takes a lot from other cultures, it still exists. It expresses the tastes of the multicultural Britain. And as Helen Watson said: "British cookery is sometimes regarded as a source of fun but actually it ranks with the best cuisines in the world. British cooking, however, is not just traditional 'Roast Beef and Yorkshire Pudding' (as seen in fig. 1). It reflects and incorporates something from all the cultures and countries Britain has had contact with throughout her long history. Indeed British cooking has inspired many culinary traditions around the world."

British cuisine is based with their geographical background and their temperature. Originally, England has natural traditional cooking ingredients; i.e. meat, fresh herbs and green leafy vegetables with honest flavor. Because of that, they got strong flavour traditional dishes, such as roast beef , pork chop, mash potatoes , steamed vegetables and sauces. Being an island, Britain has always a fresh supply of sea food from sea, salmon, Dover sole, mackerel. As well as after some time, it includes different European and Asian cuisines interaction that's started from British Empire during time of post war.

Traditionally, England has been known as a country of beefeaters and beef because the United Kingdom is largest beef producer in the Europe and third largest beef producer in the world. British beef is the finest in the world. It is based on the breeds, the grass, and climate and farming skills. Kent, a garden of cattle's: "Yorkshire pudding is most popular in England. It's made with the mixture of flour, egg and milk. Yorkshire pudding always goes with beef because it absorbs all the juice from meat and taste great with beef."

A sandwich has always been a very popular snack, but the first to eat one was the earl of sandwich 1718 - 1792. He was a dedicated gambler and refused to leave the gambling tables to eat. During the marathon gambling sessions he asked a waiter to bring him a piece of ham between two pieces of bread, and so invented the sandwich. That's got really famous in England and sandwich also got included into the high tea. High tea is a basically meal and tea which is served between four and five o'clock in the afternoon. Afternoon tea includes cake, pastries, sandwich, clotted cream and tea. (as seen in fig.2)

England is traditionally famous for its traditional classic desserts, such as from pies to fruit crumbles and summer puddings made with berries, as well as cakes flavoured with spices and dried fruits, filled with jam. Plum pudding with brandy sauce are considered English traditions.

2.Taste: The Story of Britain Through Its Cooking Hardcover - October 30, 2007 by Kate Colquhoun (Author)

Culture in Britain
The United Kingdom (UK) is rich and varied in culture, with significant influence on the...

Birmingham
Birmingham is situated just to the west of the geographical centre of England on the Birmingham...

American Culture and Civilization
American studies or American civilization is an interdisciplinary field dealing with the study of...