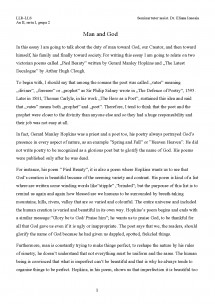 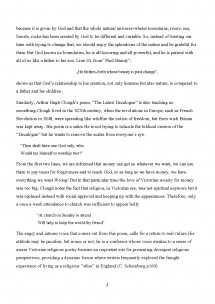 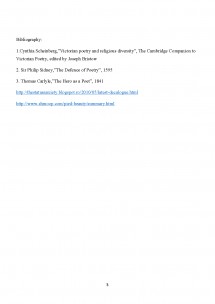 To begin with, I should say that among the romans the poet was called ,,vates" meaning ,,diviner", ,,foreseer" or ,,prophet" as Sir Philip Sidney wrote in ,,The Defence of Poetry", 1595. Later in 1841, Thomas Carlyle, in his work ,,The Hero as a Poet", sustained this idea and said that ,,vates" means both ,,prophet" and ,,poet". Therefore, I tend to think that the poet and the prophet were closer to the divinity than anyone else and so they had a huge responsability and their job was not easy at all.

In fact, Gerard Manley Hopkins was a priest and a poet too, his poetry always portrayed God's presence in every aspect of nature, as an example "Spring and Fall" or "Heaven Heaven". He did not write poetry to be recognized as a glorious poet but to glorify the name of God. His poems were published only after he was dead.

For instance, his poem " Pied Beauty", it is also a poem where Hopkins wants us to see that God's creation is beautiful because of the seeming variety and contrast. His poem is kind of a list where are written some winding words like"stipple" ,"brinded"; but the purpouse of this list is to remind us again and again how blessed are we humans to be surrounded by breath-taking mountains, hills, rivers, valley that are so varied and colourful. The entire universe and included the human creation is varied and beautiful in its own way. Hopkins's poem begins and ends with a similar message:"Glory be to God/ Praise him"; he wants us to praise God, to be thankful for all that God gave us even if it is ugly or inappropriate. The poet says that we, the readers, should glorify the name of God because he had given us dappled, spotted, frekcled things.

Furthermore, man is constantly trying to make things perfect, to reshape the nature by his rules of simetry, he doesn't understand that not everything must be uniform and the same. The human being is convinced that what is imperfect can't be beautiful and that is why he always tends to organise things to be perfect. Hopkins, in his poem, shows us that imperfection it is beautiful too because it is given by God and that the whole natural universe-wheter mountains, rivers, sea, forests, rocks-has been created by God to be different and variable. So, instead of wasting our time with trying to change that, we should enjoy the splendours of the nature and be grateful for them.But God knows no boundaries, he is all-knowing and all-powerful, and he is patient with all of us like a father to his son. Line 10, from" Pied Beauty",

,,He fathers-forth whose beauty is past change",

shows us that God's relationship to his creation, not only humans but also nature, is compared to a father and his children.

Similarly, Arthur Hugh Clough's poem, "The Latest Decalogue" is also teaching us something.Clough lived in the XIXth century, when the revolutions in Europe, such as French Revolution in 1848, were spreading like wildfire the notion of freedom, but from wich Britain was kept away. His poem is a satire.He is not trying to ridicule the biblical version of the "Decalogue" but he wants to remove the scales from everyone's eye.

"Thou shalt have one God only; who

Would tax himself to worship two?"

From the first two lines, we are informed that money can get us whatever we want, we can use them to pay taxes for forgiveness and to reach God, so as long as we have money, we have everything we want.Wrong! But in that particular time the love of Victorian society for money was too big. Clough notes the fact that religion, in Victorian era, was not spiritual anymore but it was replaced instead with social approval and keeping up with the appearances. Therefore, only a once a week attendance to church was sufficient to appear holly

"At church on Sunday to attend

Will help to keep the world thy friend"

The angry and intense voice that comes out from this poem, calls for a return to real values.His attitude may be peculiar, but ironic or not, he is a confessor whose voice awakes to a sense of aware.Victorian religious poetry became an important site for presenting divergent religious perspectives, providing a dynamic forum where writers frequently explored the fraught experience of living as a religious "other" in England.(C. Scheinberg p160)

God And Satan
Everyone in this world has heard about the existents of God and Satan. It says that God...

American vs english wedding customs and traditions
Throughout the world, all cultures have their on view regarding the wedding ceremony. In my...

The English Gothic Novel and the Sexual anxieties
The subject of this work is mainly the sexual anxieties presented by English writers of Gothic...
Sus!