The movement from Neoclass to Romantic poetry 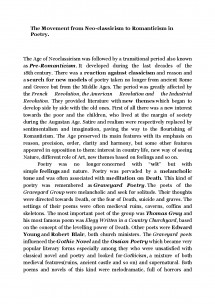 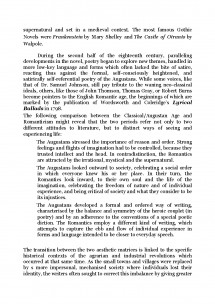 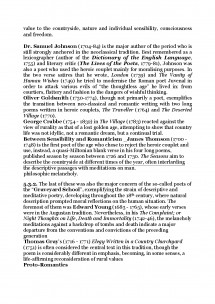 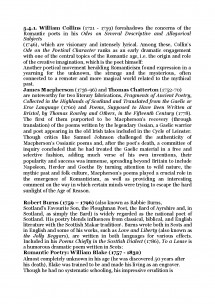 The Age of Neoclassicism was followed by a transitional period also known as Pre-Romanticism. It developed during the last decades of the 18th century. There was a reaction against classicism and reason and a search for new models of poetry taken no longer from ancient Rome and Greece but from the Middle Ages. The period was greatly affected by the French Revolution, the American Revolution and the Industrial Revolution. They provided literature with new themes which began to develop side by side with the old ones. First of all there was a new interest towards the poor and the children, who lived at the margin of society during the Augustan Age. Satire and realism were respectively replaced by sentimentalism and imagination, paving the way to the flourishing of Romanticism. The Age preserved its main features with its emphasis on reason, precision, order, clarity and harmony, but some other features appeared in opposition to them: interest in country life, new way of seeing Nature, different role of Art, new themes based on feelings and so on.

Poetry was no longer concerned with "wit" but with simple feelings and nature. Poetry was pervaded by a melancholic tone and was often associated with meditation on Death. This kind of poetry was remembered as Graveyard Poetry. The poets of the Graveyard Group were melancholic and seek for solitude. Their thoughts were directed towards Death, or the fear of Death, suicide and graves. The settings of their poems were often medieval ruins, caverns, coffins and skeletons. The most important poet of the group was Thomas Gray and his most famous poem was Elegy Written in a Country Churchyard, based on the concept of the levelling power of Death. Other poets were Edward Young and Robert Blair, both church ministers. The Graveyard poets influenced the Gothic Novel and the Ossian Poetry which became very popular literary forms especially among they who were unsatisfied with classical novel and poetry and looked for Gothicism, a mixture of both medieval features(ruins, ancient castle and so on) and supernatural. Both poems and novels of this kind were melodramatic, full of horrors and supernatural and set in a medieval context. The most famous Gothic Novels were Frankenstein by Mary Shelley and The Castle of Otranto by Walpole.

During the second half of the eighteenth century, paralleling developments in the novel, poetry began to explore new themes, handled in more low-key language and forms which often lacked the bite of satire, reacting thus against the formal, self-consciously heightened, and satirically self-referential poetry of the Augustans. While some voices, like that of Dr. Samuel Johnson, still pay tribute to the waning neo-classical ideals, others, like those of John Thomson, Thomas Gray, or Robert Burns become pointers to the English Romantic age, the beginnings of which are marked by the publication of Wordsworth and Coleridge's Lyrical Ballads in 1798.

The following comparison between the Classical/Augustan Age and Romanticism might reveal that the two periods refer not only to two different attitudes to literature, but to distinct ways of seeing and experiencing life:

The Augustans stressed the importance of reason and order. Strong feelings and flights of imagination had to be controlled, because they trusted intellect and the head. In contradistinction, the Romantics are attracted by the irrational, mystical and the supernatural.

The Augustans looked outward to society, celebrating a social order in which everyone knew his or her place. In their turn, the Romantics look inward, to their own soul and the life of the imagination, celebrating the freedom of nature and of individual experience, and being critical of society and what they consider to be its injustices.

The Augustans developed a formal and ordered way of writing, characterised by the balance and symmetry of the heroic couplet (in poetry) and by an adherence to the conventions of a special poetic diction. The Romantics employ a different kind of writing, which attempts to capture the ebb and flow of individual experience in forms and language intended to be closer to everyday speech

Human and Phisic Aspects in The Novels of D.H. Lawrence
Introduction Almost unconsciously, when we now converse about twentieth century writers or...

Comparative Literature Project - Wordsworth and Coleridge
I have chosen to speak about those authors because they were a major shift in history, based on...