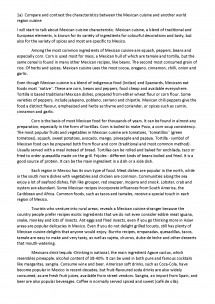 I will start to talk about Mexican cuisine characteristic. Mexican cuisine, a blend of traditional and European elements, is known for its variety of ingredients for colourful decorations and tasty, but also for the variety of spices and most are specific to Mexico.

Among the most common ingredients of Mexican cuisine are squash, peppers, beans and especially corn. Corn is used most for mass, a Mexican hull of which are tamale and tortilla, but the same cereal is found in many other Mexican recipes, like beans. The second most consumed grain of rice. Of herbs and spices, Mexican cuisine uses the most cocoa, oregano, cinnamon, chilli, onion and garlic.

Even though Mexican cuisine is a blend of indigenous food (Indian) and Spaniards, Mexicans eat foods most "native". These are corn, beans and peppers, food cheap and available everywhere. Tortilla is based traditional Mexican dishes, prepared from either wheat flour or corn flour. Some varieties of peppers, include jalapeno, poblano, serrano and chipotle. Mexican chili peppers give the food a distinct flavour, emphasized and herbs as thyme and coriander, or spices such as cumin, cinnamon and garlic.

Corn is the basis of most Mexican food for thousands of years. It can be found in almost any preparation, especially in the form of tortillas. Corn is boiled to make Pozo, a corn soup consistency. The most popular fruits and vegetables in Mexican cuisine are tomatoes, "tomatillos" (green tomatoes), squash, sweet potatoes, avocado, mango, pineapple and papaya. Tortilla - symbol of Mexican food can be prepared both from flour and corn (traditional and most common method). Usually served with a meal instead of bread. Tortillas can be rolled and baked for enchilada, taco or fried to order quesadilla made on the grill. Frijoles - different kinds of beans boiled and fried. It is a good source of protein. It can be the main ingredient in a dish or a side dish.

Each region in Mexico has its own type of food. Meat dishes are popular in the north, while in the south more dishes with vegetables and chicken are common. Communities along the sea enjoy a lot of seafood dishes, fish like grouper, red snapper, mojarra and snook. Lobster, crab and oysters are abundant. Some Mexican recipes incorporate influences from South America, the Caribbean and Africa. Common foods, such as tacos and tamales, receive a special touch in each region of Mexico.

Tourists who venture into rural areas, reveals a Mexican cuisine stranger because the country people prefer recipes exotic ingredients that we do not even consider edible meat iguana, snake, monkey and lots of insects. Ant eggs and fried insects, even if you go thinking more in Asian areas are popular delicacies in Mexico. Even if you do not delight grilled locusts, still has plenty of Mexican cuisine delights that anyone would enjoy. Burrito recipes, empanadas, quesadillas, tacos, tamale are easy to make and very tasty, as well as cajeta, churros, dulce de leche and other desserts that mouth-watering.

Mexicans drink tequila -Drinking is national, the main ingredient Agave cactus, which resembles pineapple, alcohol content of 38-40%. It can be used in both pure and famous cocktails like margaritas, sangria. Consume wine and beer. American soft drinks, such as Coca-Cola, have become popular in Mexico in recent decades, but fruit-flavoured soda drinks are also widely consumed, as are fresh fruit juices, available from street vendors. Sangria, an import from Spain, and beer are also popular beverages. Coffee is normally served spiced and sweet (cafe de olla).

Word and Word Classes
Lecture 1 1 Words and word classes In grammar, we first need to identify the types of...

Junk Food
As far as I'm concerned, I'm hearing a lot about junk food lately. No one has given an exact...

Healthy food
Eating is one of the most important events in everyone's life. We enjoy eating. It's part of who...

Scottish customs and traditions
Scotland is one of four constituent nations which form the United Kingdom. Its visitor should be...

British cuisine
Some time ago Somerset Maugham said that "to eat well in England, you should have breakfast...
Sus!