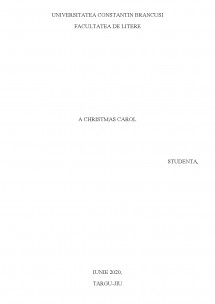 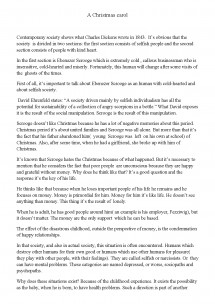 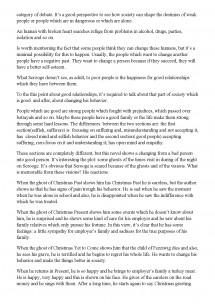 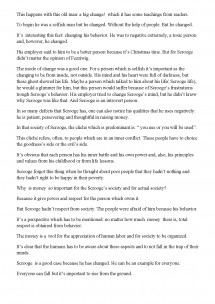 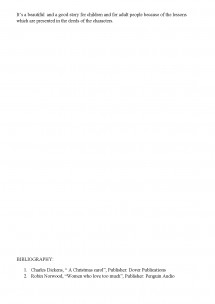 In the first section is Ebenezer Scrooge which is extremely cold , callous businessman who is insensitive, cold-hearted and miserly. Fortunately, this human will change after some visits of the ghosts of the times.

First of all, it's important to talk about Ebenezer Scrooge as an human with cold-hearted and about selfish society.

Scrooge doesn't like Christmas because he has a lot of negative memories about this period. Christmas period it's about united families and Scrooge was all alone. But more than that it's the fact that his father abandoned him( young Scrooge was left on his own at school) of Christmas. Also, after some time, when he had a girlfriend, she broke up with him of Christmas.

It's known that Scrooge hates the Christmas because of what happened. But it's necessary to mention that he considers the fact that poor people are unconscious because they are happy and grateful without money. Why does he think like that? It's a good question and the response it's the key of his life.

He thinks like that because when he loses important people of his life he remains and he focuses on money. Money is primordial for him. Money for him it's like life. He doesn't see anything than money. This thing it's the result of lonely.

When he is adult, he has good people around him( an example is his employer, Fezziwig), but it doesn't matter. The money are the only support which he can be based.

The effect of the disastrous childhood, outside the perspective of money, is the condemnation of happy relationships.

In that society, and also in actual society, this situation is often encountered. Humans which destroy other humans for their own good or humans which use other humans for pleasure( they play with other people, with their feelings). They are called selfish or narcissists. Or they can have mental problems. These categories are named depressed, or worse, sociopaths and psychopaths.

Why does these situations exist? Because of the childhood experience. It exists the possibility as the baby, when he is born, to have health problems. Such a direction is part of another category of debate. It's a good perspective to see how society can shape the destinies of weak people or people which are in dangerous or which are alone.

An human with broken heart searches refuge from problems in alcohol, drugs, parties, isolation and so on.

Is worth mentioning the fact that some people think they can change these humans, but it's a minimal possibility for this to happen. Usually, the people which want to change another people have a negative past. They want to change a person because if they succeed, they will have a better self-esteem.

What Scrooge doesn't see, as adult, to poor people is the happiness for good relationships which they have between them.

To the this point about good relationships, it's required to talk about that part of society which is good and after, about changing his behavior.

2. Robin Norwood, "Women who love too much", Publisher: Penguin Audio

Christmas
Santa Claus is coming to town so many wishes to fulfill, so many inpatients children waiting...

Christmas In England
Celebrating Christmas in England is much like celebrating it in any other Western country. Even...