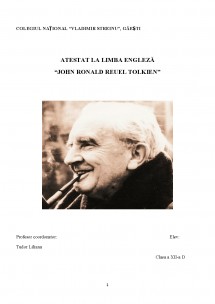 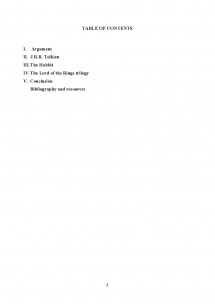 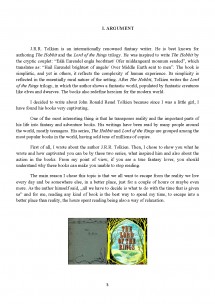 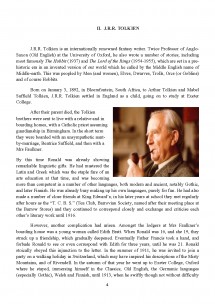 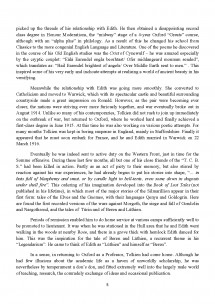 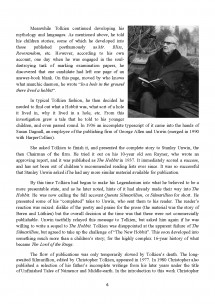 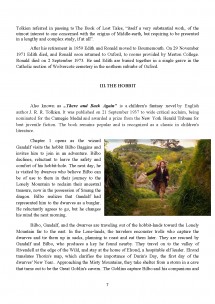 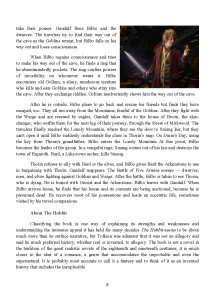 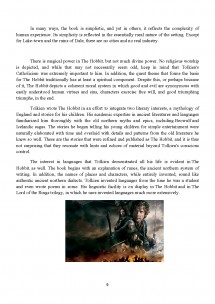 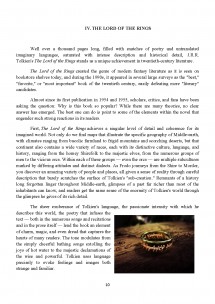 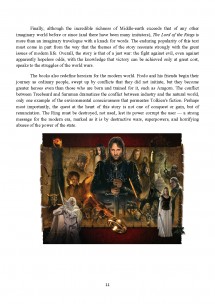 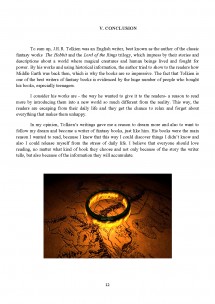 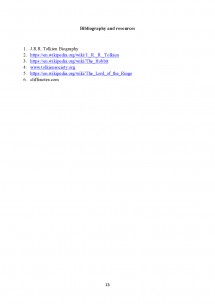 I. Argument
II. J.R.R. Tolkien
III. The Hobbit
IV. The Lord of the Rings trilogy
V. Conclusion
Bibliography and resources

J.R.R. Tolkien is an internationally renowned fantasy writer. He is best known for authoring The Hobbit and the Lord of the Rings trilogy. He was inspired to write The Hobbit by the cryptic couplet: "Eili Earendel engla beorhtast/ Ofer middangeard monnum sended", which translates as: "Hail Earendel brightest of angels/ Over Middle Earth sent to men". The book is simplistic, and yet in others, it reflects the complexity of human experience. Its simplicity is reflected in the essentially rural nature of the setting. After The Hobbit, Tolkien writes the Lord of the Rings trilogy, in which the author shows a fantastic world, populated by fantastic creatures like elves and dwarves. The books also redefine heroism for the modern world.

I decided to write about John Ronald Reuel Tolkien because since I was a little girl, I have found his books very captivating.

One of the most interesting thing is that he transposes reality and the important parts of his life into fantasy and adventure books. His writings have been read by many people around the world, mostly teenagers. His series, The Hobbit and Lord of the Rings are grouped among the most popular books in the world, having sold tens of millions of copies.

First of all, I wrote about the author J.R.R. Tolkien. Then, I chose to show you what he wrote and how captivated you can be by these two series, what inspired him and also about the action in the books. From my point of view, if you are a true fantasy lover, you should understand why these books can make you unable to stop reading.

The main reason I chose this topic is that we all want to escape from the reality we live every day and be somewhere else, in a better place, just for a couple of hours or maybe even more. As the author himself said, ,,all we have to decide is what to do with the time that is given us" and for me, reading any kind of book is the best way to spend my time, to escape into a better place than reality, the hours spent reading being also a way of relaxation.

J.R.R. Tolkien is an internationally renowned fantasy writer. Twice Professor of Anglo-Saxon (Old English) at the University of Oxford, he also wrote a number of stories, including most famously The Hobbit (1937) and The Lord of the Rings (1954-1955), which are set in a pre-historic era in an invented version of our world which he called by the Middle English name of Middle-earth. This was peopled by Men (and women), Elves, Dwarves, Trolls, Orcs (or Goblins) and of course Hobbits.

Born on January 3, 1892, in Bloemfontein, South Africa, to Arthur Tolkien and Mabel Suffield Tolkien, J.R.R. Tolkien settled in England as a child, going on to study at Exeter College.

After their parent died, the Tolkien brothers were sent to live with a relative and in boarding homes, with a Catholic priest assuming guardianship in Birmingham. In the short term they were boarded with an unsympathetic aunt-by-marriage, Beatrice Suffield, and then with a Mrs Faulkner.

By this time Ronald was already showing remarkable linguistic gifts. He had mastered the Latin and Greek which was the staple fare of an arts education at that time, and was becoming more than competent in a number of other languages, both modern and ancient, notably Gothic, and later Finnish. He was already busy making up his own languages, purely for fun. He had also made a number of close friends at King Edward's; in his later years at school they met regularly after hours as the "T. C. B. S." (Tea Club, Barrovian Society, named after their meeting place at the Barrow Stores) and they continued to correspond closely and exchange and criticise each other's literary work until 1916.

However, another complication had arisen. Amongst the lodgers at Mrs Faulkner's boarding house was a young woman called Edith Bratt. When Ronald was 16, and she 19, they struck up a friendship, which gradually deepened. Eventually Father Francis took a hand, and forbade Ronald to see or even correspond with Edith for three years, until he was 21. Ronald stoically obeyed this injunction to the letter. In the summer of 1911, he was invited to join a party on a walking holiday in Switzerland, which may have inspired his descriptions of the Misty Mountains, and of Rivendell. In the autumn of that year he went up to Exeter College, Oxford where he stayed, immersing himself in the Classics, Old English, the Germanic languages (especially Gothic), Welsh and Finnish, until 1913, when he swiftly though not without difficulty picked up the threads of his relationship with Edith. He then obtained a disappointing second class degree in Honour Moderations, the "midway" stage of a 4-year Oxford "Greats" course, although with an "alpha plus" in philology. As a result of this he changed his school from Classics to the more congenial English Language and Literature. One of the poems he discovered in the course of his Old English studies was the Crist of Cynewulf - he was amazed especially by the cryptic couplet: "Eili Earendel engla beorhtast/ Ofer middangeard monnum sended", which translates as: "Hail Earendel brightest of angels/ Over Middle Earth sent to men." . This inspired some of his very early and inchoate attempts at realising a world of ancient beauty in his versifying.

Meanwhile the relationship with Edith was going more smoothly. She converted to Catholicism and moved to Warwick, which with its spectacular castle and beautiful surrounding countryside made a great impression on Ronald. However, as the pair were becoming ever closer, the nations were striving ever more furiously together, and war eventually broke out in August 1914. Unlike so many of his contemporaries, Tolkien did not rush to join up immediately on the outbreak of war, but returned to Oxford, where he worked hard and finally achieved a first-class degree in June 1915. At this time he was also working on various poetic attempts. For many months Tolkien was kept in boring suspense in England, mainly in Staffordshire. Finally it appeared that he must soon embark for France, and he and Edith married in Warwick on 22 March 1916.