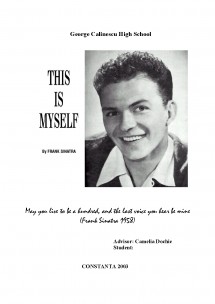 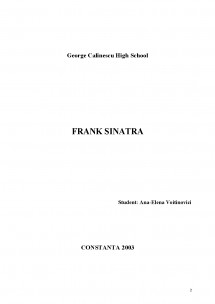 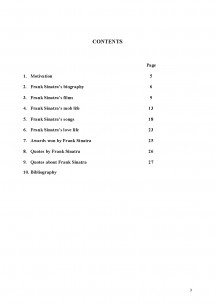 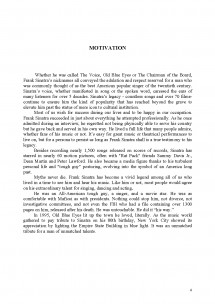 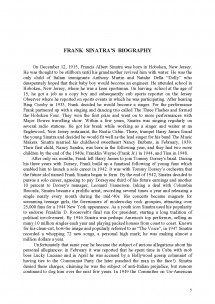 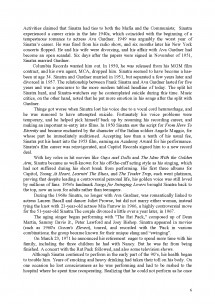 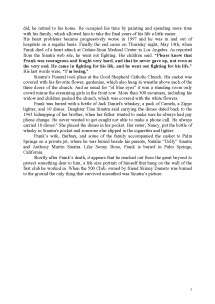 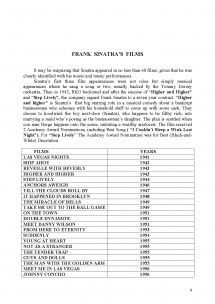 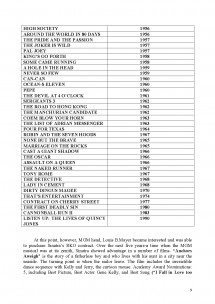 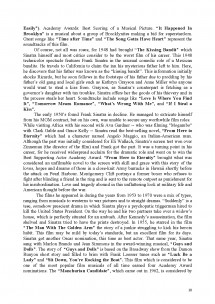 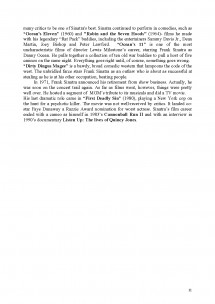 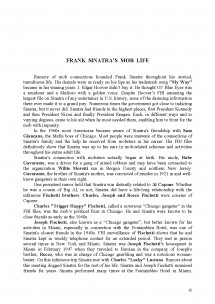 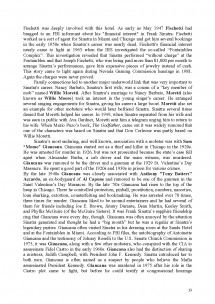 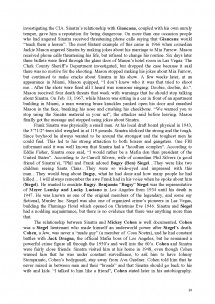 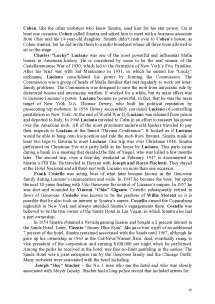 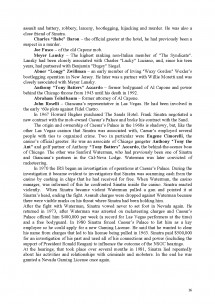 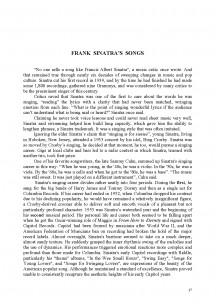 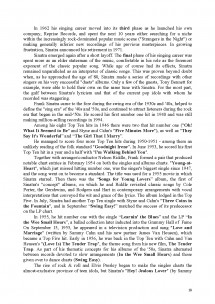 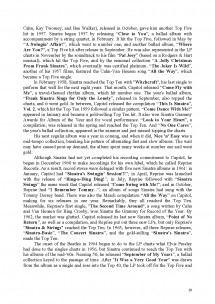 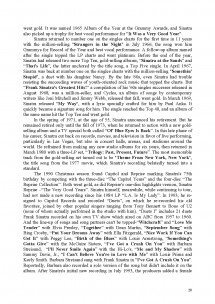 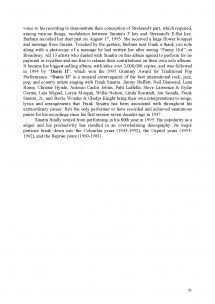 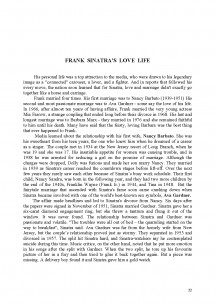 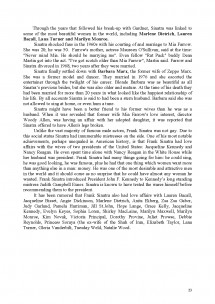 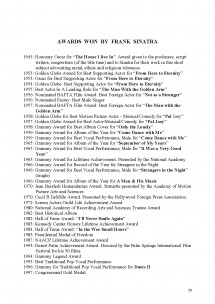 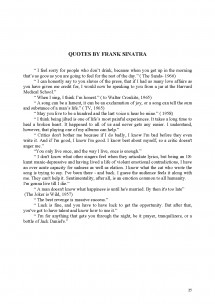 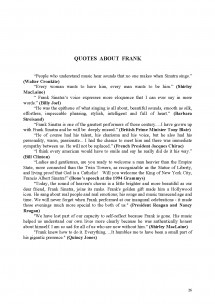 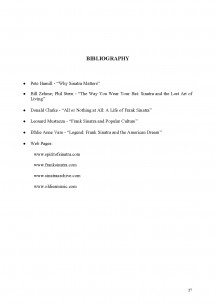 Whether he was called The Voice, Old Blue Eyes or The Chairman of the Board, Frank Sinatra's nicknames all conveyed the adulation and respect reserved for a man who was commonly thought of as the best American popular singer of the twentieth century. Sinatra's voice, whether manifested in song or the spoken word, caressed the ears of many listeners for over 5 decades. Sinatra's legacy - countless songs and over 70 films- continue to ensure him the kind of popularity that has reached beyond the grave to elevate him past the status of mere icon to cultural institution.

Most of us wish for success during our lives and to be happy in our occupation. Frank Sinatra succeeded in just about everything he attempted professionally. As he once admitted during an interview, he regretted not being physically able to serve his country but he gave back and served in his own way. He lived a full life that many people admire, whether fans of his music or not. It's easy for great music or theatrical performances to live on, but for a persona to persist as long as Frank Sinatra shall is a true testimony to his legacy.

Besides recording nearly 1,500 songs released on scores of records, Sinatra has starred in nearly 60 motion pictures, often with "Rat Pack" friends Sammy Davis Jr., Dean Martin and Peter Lawford. He also became a media figure thanks to his turbulent personal life and "tough guy" posturing, evolving into the symbol of an America long past.

Myths never die. Frank Sinatra has become a vivid legend among all of us who lived in a time to see him and hear his music. Like him or not, most people would agree on his extraordinary talent for singing, dancing and acting.

He was an All-American tough guy, a singer, and a movie star. He was as comfortable with Mafiosi as with presidents. Nothing could stop him, not divorce, not investigative committees, and not even the FBI who had a file containing over 1300 pages on him, released after his death. He was untouchable. He did it "his way."

In 1995, Old Blue Eyes lit up the town he loved, literally. As the music world gathered to pay tribute to Sinatra on his 80th birthday, New York City showed its appreciation by lighting the Empire State Building in blue light. It was an unmatched tribute for a man of unmatched talents.

On December 12, 1915, Francis Albert Sinatra was born in Hoboken, New Jersey. He was thought to be stillborn until his grandmother revived him with water. He was the only child of Italian immigrants Anthony Martin and Natalie Della "Dolly" who dessperately hoped that their baby boy would become an engineer. He attended school in Hoboken, New Jersey, where he was a keen sportsman. On leaving school at the age of 15, he got a job as a copy boy and subsequently cub sports reporter on the Jersey Observer where he reported on sports events in which he was participating. After hearing Bing Crosby in 1935, Frank decided he would become a singer. For the performance Frank partnered up with a singing and dancing trio called The Three Flashes and formed the Hoboken Four. They won the first prize and went on to more performances with Major Bowes travelling show. Within a few years, Sinatra was singing regularly on several radio stations. He got his break while working as a singer and waiter at an Englewood, New Jersey restaurant, the Rustic Cabin. There, trumpet Harry James found the young Sinatra and decided he would fit well as the lead singer for his band The Music Makers. Sinatra married his childhood sweetheart Nancy Barbato, in February, 1939. Their first child, Nancy Sandra, was born in the following year, and they had two more children by the end of the 1940s, Franklin Wayne (Frank Jr.) in 1944, and Tina in 1948.

After only six months, Frank left Harry James to join Tommy Dorsey's band. During his three years with Dorsey, Frank build up a fanatical following of young fans which enabled him to launch a solo career in 1942. It was with Tommy Dorsey's orchestra that the future idol named Frank Sinatra began to form. By the end of 1942, Sinatra decided to pursue a solo career, agreeing to pay Dorseyone third of his future earnings and another 10 percent to Dorsey's manager, Leonard Vannerson. Inking a deal with Columbia Records, Sinatra became a prolific artist, recording several times a year and releasing a single nearly every month during the mid-'40s. His concerts became magnets for screaming teenage girls, the forerunners of modern-day rock groupies, attracting over 25,000 fans for a 1944 New York appearance. As a youth icon Sinatra used his popularity to endorse Franklin D. Roosevelt's final run for president, starting a long tradition of political involvement. By 1946 Sinatra was perhaps America's top performer, selling as many 10 million singles each year and playing packed houses from coast to coast. Known for his clean-cut, bow-tie image and popularly referred to as "The Voice", in 1947 Sinatra recorded a whopping 72 new songs, a personal high mark; he was making almost a million dollars a year.

Unfortunately that same year he became the subject of serious allegations about his personal allegiances: in February it was reported that he spent time in Cuba with mob boss Lucky Luciano and in April he was accused by a Hollywood gossip columnist of having ties to the Communist Party (he later punched the man in the face!). Sinatra denied these charges, claiming he was the subject of anti-Italian prejudice, but rumors continued to dog him over the next few years. In 1949 the Committee on Un-American Activities claimed that Sinatra had ties to both the Mafia and the Communists; Sinatra experienced a career crisis in the late 1940s, which coincided with the beginning of a tempestuous romance to actress Ava Gardner. 1949 was arguably the worst year of Sinatra's career. He was fired from his radio show, and six months later his New York concerts flopped. He and his wife were divorcing, and his affair with Ava Gardner had become an open scandal. Six days after the papers were signed in November of 1951, Sinatra married Gardner.

Columbia Records wanted him out. In 1950, he was released from his MGM film contract, and his own agent, MCA, dropped him. Sinatra seemed to have become a has-been at age 34. Sinatra and Gardner married in 1951, but separated a few years later and divorced in 1957. The relationship between Frank Sinatra and Ava Gardner lasted for five years and was a precursor to the more modern tabloid headline of today. The split hit Sinatra hard, and Sinatra-watchers say he contemplated suicide during this time. Music critics, on the other hand, noted that he put more emotion in his songs after the split with Gardner.

- Bill Zehme; Phil Stern - "The Way You Wear Your Hat: Sinatra and the Lost Art of Living"

- Donald Clarke - "All or Nothing at All: A Life of Frank Sinatra"

Frank Sinatra
A Tough question. Personally speaking, the Columbia years are the most sentimental for me. My...