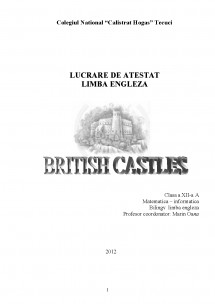 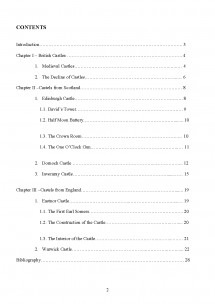 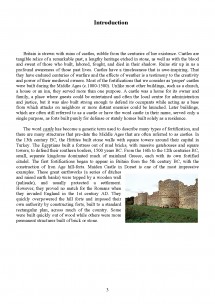 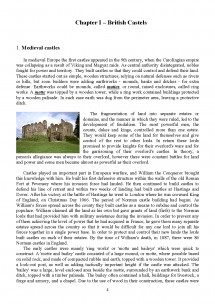 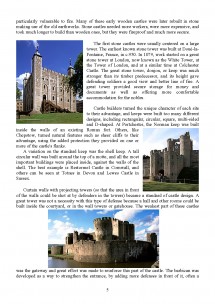 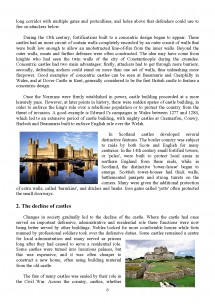 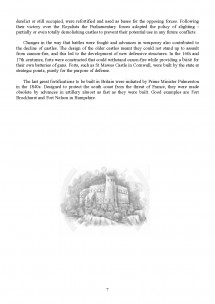 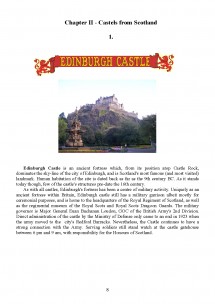 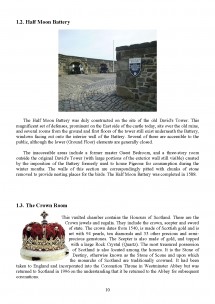 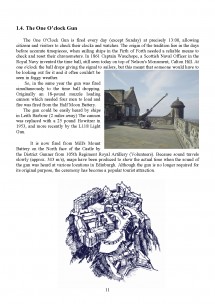 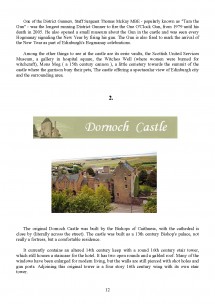 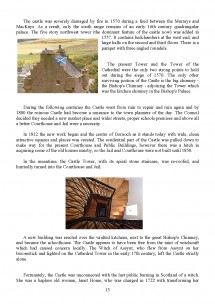 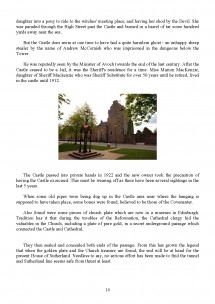 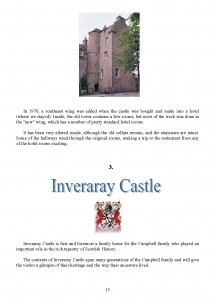 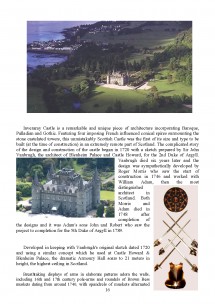 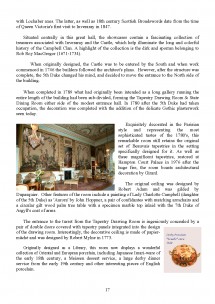 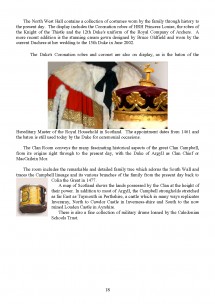 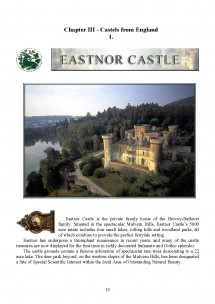 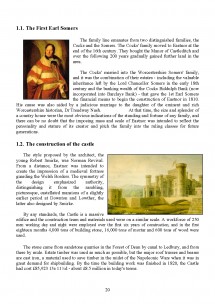 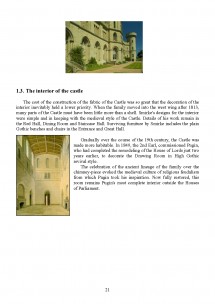 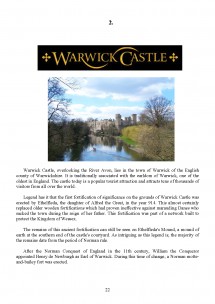 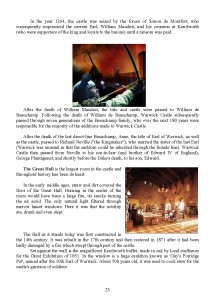 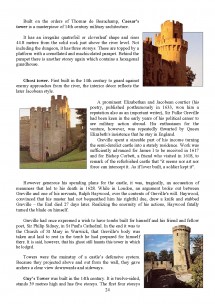 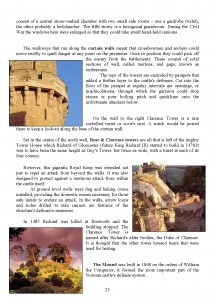 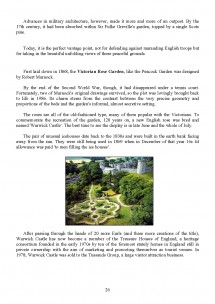 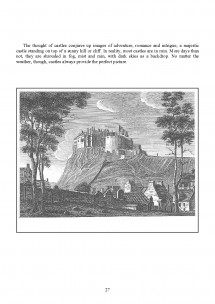 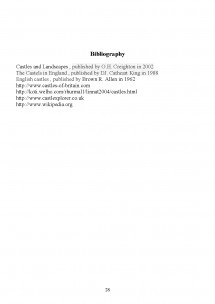 Britain is strewn with ruins of castles, rubble from the centuries of her existence. Castles are tangible relics of a remarkable past, a lengthy heritage etched in stone, as well as with the blood and sweat of those who built, labored, fought, and died in their shadow. Ruins stir up in us a profound awareness of those past lives. Castles have a timelessness that is awe-inspiring. That they have endured centuries of warfare and the effects of weather is a testimony to the creativity and power of their medieval owners. Most of the fortifications that we consider as 'proper' castles were built during the Middle Ages (c.1000-1500). Unlike most other buildings, such as a church, a house or an inn, they served more than one purpose. A castle was a home for its owner and family, a place where guests could be entertained and often the local centre for administration and justice, but it was also built strong enough to defend its occupants while acting as a base from which attacks on neighbors or more distant enemies could be launched. Later buildings, which are often still referred to as a castle or have the word castle in their name, served only a single purpose, as forts built purely for defense or stately homes built solely as a residence.

The word castle has become a generic term used to describe many types of fortification, and there are many structures that pre-date the Middle Ages that are often referred to as castles. In the 13th century BC, the Hittites built stone walls with square towers around their capital in Turkey. The Egyptians built a fortress out of mud bricks, with massive gatehouses and square towers, to defend their southern borders, 1500 years BC. From the 16th to the 12th centuries BC, small, separate kingdoms dominated much of mainland Greece, each with its own fortified citadel. The first fortifications began to appear in Britain from the 5th century BC, with the construction of Iron Age hill-forts. Maiden Castle in Dorset is one of the most impressive examples. These great earthworks (a series of ditches and raised earth banks) were topped by a wooden wall (palisade), and usually protected a settlement. However, they proved no match for the Romans when they invaded England in the 1st century AD. They quickly overpowered the hill forts and imposed their own authority by constructing forts, built to a standard rectangular plan, across much of the country. Some were built quickly out of wood while others were more permanent structures built of brick or stone.

In medieval Europe the first castles appeared in the 9th century, when the Carolingian empire was collapsing as a result of Viking and Magyar raids. As central authority disintegrated, nobles fought for power and territory. They built castles so that they could control and defend their land. These castles started out as simple, wooden structures, relying on natural defenses such as rivers or hills, but soon builders were adding earthworks - mounds, banks and ditches - for extra defense. Earthworks could be mounds, called mottes, or round, raised enclosures, called ring works. A motte was topped by a wooden tower; while a ring work contained buildings protected by a wooden palisade. In each case earth was dug from the perimeter area, leaving a protective ditch.

The fragmentation of land into separate estates or domains, and the manner in which they were ruled, led to the development of feudalism. The most powerful men, the counts, dukes and kings, controlled more than one estate. They would keep some of the land for themselves and give control of the rest to other lords. In return these lords promised to provide knights for their overlord's wars and for the garrisoning of their overlord's castles. In theory, a person's allegiance was always to their overlord, however there were constant battles for land and power and some men became almost as powerful as their overlord.

Castles played an important part in European warfare, and William the Conqueror brought this knowledge with him. He built his first defensive structure within the walls of the old Roman Fort at Pevensey where his invasion force had landed. He then continued to build castles to defend his line of retreat and within two weeks of landing had built castles at Hastings and Dover. After his victory at the battle of Hastings he went to London where he was crowned King of England, on Christmas Day 1066. The period of Norman castle building had begun. As William's forces spread across the county they built castles as a means to subdue and control the populace. William claimed all the land as his own but gave grants of land (fiefs) to the Norman lords that had provided him with military assistance during the invasion. In order to prevent any of them achieving the level of power that he had acquired in France, he gave them many separate estates spread across the country so that it would be difficult for any one lord to join all his forces together in a single power base. In order to protect and control their new lands the lords built castles on each of their estates. By the time of William's death, in 1087, there were 86 Norman castles in England.

The early castles were mainly 'ring works' or 'motte and baileys' which were quick to construct. A 'motte and bailey' castle consisted of a large mound, or motte, where possible based on solid rock, and made of compacted rubble and earth, topped with a wooden tower. It provided a look-out post, as well as adding tactically important height if the castle was attacked. The 'bailey' was a large, level enclosed area beside the motte, surrounded by an earthwork bank and ditch, topped with a timber palisade. The bailey often contained a hall, buildings for livestock, a forge and armory, and a chapel. Due to the use of wood in their construction, these castles were particularly vulnerable to fire. Many of these early wooden castles were later rebuilt in stone making use of the old earthworks. Stone castles needed more workers, were more expensive, and took much longer to build than wooden ones, but they were fireproof and much more secure.

Castles and Landscapes , published by O.H. Creighton in 2002

The Castels in England , published by DJ. Cathcart King in 1988

Women`s condition reflected in the British and Romanian literature
Introduction Since woman`s discrimination is still a disputed issue that does not seem to end up...

Great Britain
Argument I have chosen Great Britain because the origin of the English which is spoken, written...

Get Away From It All
Get away from it all If you really want an exciting holiday, a stay at a British castle might be...

Buckingham Palace - The heart of London
Britain is strewn with ruins of castles, rubble from the centuries of her existence. Castles...
Sus!